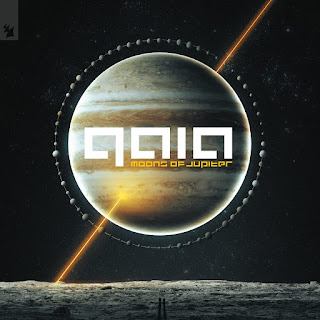 In Trance music, DJ/Producer's aliases can be just as respected as their original names as it gives both the artists and fans the chance to embrace new creativity. Despite attempts to keep the identity of who GAIA really are a mystery based on performances in dark robes, the collaboration of Armin van Buuren & Benno de Goeij has become quite revered in electronic dance music, more importantly trance music.

'Moons of Jupiter' embraces ambient, melodic techno, and trance sounds both artists have explored via solo careers, but as GAIA, the journey they have created to honor space exploration and Jupiter's moons is quite brilliant. The connection between space and trance music has continued to intrigue and puzzle fans of the genre. As explored on this blog before, a complete album as a "mix cut" allow for a complete experience as they performed the album live before it was actually an album. You are encouraged to listen to the album in it's entirety to get the full experience, and perhaps more than once.  The long wait for this album has been well worth it, and please support the album via the many avenues and platforms available.