If you have any awareness about EDM (Electronic Dance Music) as a whole, then you are aware of that three days of music, dancing, and merriment that is EDC (Electric Daisy Carnival).  In fact, this is a special year as Insomniac is celebrated 20 editions of this yearly festival.

Back in the 1990s, there was this music called "Techno", it was underground in the United States, yet really popular in Europe.  This was of course the years of pop, hip-hop/rap, rock, and the like of that era. This "techno" music was widely excepted in the LBGT clubs or those "underground" warehouses of cities.

Let's fast forward to present day, to the years of EDM as a whole blowing up in the United States as other genres embrace collaborations, and want to join what is now mainstream. The appeal for this type of music has sparked Jack U (Skrillex & Diplo plus Justin Bieber) among others. Some may even claim the Black Eyed Peas has something to do with the explosion of "new" found popularity. 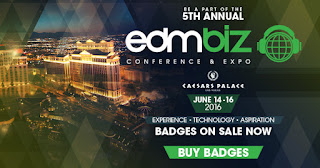 It's time to connect to the EDMBiz Conference & Expo that marks just one of the events during EDC Week leading up to the big event. The line up of speakers connected to the EDM industry is fully loaded. From artist pioneers Paul Oakenfold, Markus Schulz, Moby, Armin Van Buuren, to industry leaders Pasquale Rotella, Geronimo, Dave Ralph, and many more!

Of course, the list of speakers can be found as panels or keynotes, but an impressive list nonetheless. Housed for three days at Caesar's Palace, the conference will also include exhibitors associated with the industry. Since it's inception in 2011, the conference looks to show the more intricate side by including events such as: Hackathon, & EDMBiz Song Contest.

There are ONLY 19 more days to register, plan travel arrangements, and get ready for a really great learning experience!

Posted by Brooke Brown at 1:23 PM No comments: 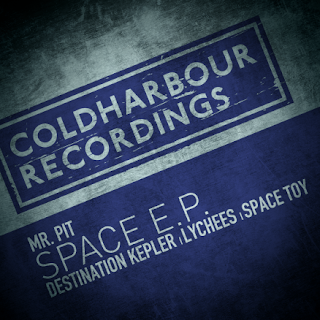 If you are follower of this blog or like trance music, you may be aware of the FIRE coming from Coldharbour Recordings. Yes, the label spearheaded by Markus Schulz. You have been introduced to other artists and tracks released by this label, but now, it is time to talk about new the tracks produced by Mr. Pit.

"Destination Kepler" has that familiar dark Coldharbour sound, but with that uplifting trance vibe. The vocals are relaxing yet invigorating, then the first drop hits. You will immediately vibe, dance, and like this track. To dive a bit deeper than just the overarching melody, the background beats are infectious even for the novice trance fan.

"Lychees" has a progressive vibe from the very first beat. However, as the track progresses, you will hear the melodies. Just like the tracks before it, the infectious progressive trance vibe will suck you in, and keep you in a relaxing state of trance. Oh, and the ending of the track is a quite refreshing.

"Space Toy" is has that building, dark, Coldharbour sound from the very beginning, and it does not end. Then the melodies begin to infiltrate your ears. The build up from each new second of the song really is the gift that keeps on giving throughout the listening experience. Take a listen for yourself:


It is HIGHLY recommended that you buy these tracks and spread the word to your fellow trance family. Nice work by Mr. Pit and the Coldharbour crew!
Posted by Brooke Brown at 3:00 PM No comments: 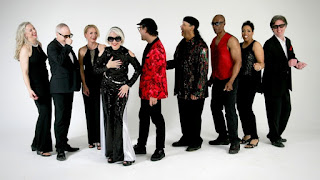 When you think of the genre of "Freestyle" from the 1980s, you think of Nu Shooz.  If you forgot their artist name, then you know the songs "I Can't Wait" or "Point of No Return".  If you have a TV subscription, you have heard a remixed version of "I Can't Wait" in Target commercials. You must respect that genre, and the artists to have emerged from that era. The Latin influence fused with electronic sounds can be credited with sparking the electronic dance music "movement" to an extent. 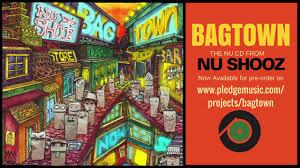 So this brings us to their "Nu" release, and as discussed months back on the Trending Topics with BB podcast, a return to the sound that they intended to release, but the history spoke for it self. 'Bagtown' influenced by their desire to create new music again and the artwork by founding member's son.  The opening and title song "Bagtown" immediately attracts you if you like the fusion of Latin styles with Jazz.  The vocals by all in this song are great.  The funky groove of  "Soul Cushion" will get your toe tapping or in another case you will be dancing along. "Your Perfect Day" is another funky song with a great vocals.

In fact, if you continue to listen to the entire album you will be finding yourself in a really good mood due to the passion that went into creating this album. From the musicianship in the horns to the vocals, to the rhythm section, this album was made for those appreciative of their craft. If you are looking for a "Nu" album to add to your collection, pick up a copy, add the album to your streaming favorites on Spotify, and simply enjoy it!


Posted by Brooke Brown at 4:02 PM No comments: 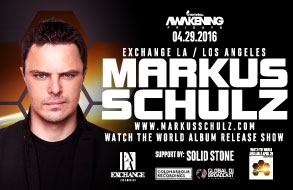 The anticipation of the new artist album my Markus Schulz has been building for quite some time.  The #UnicornSlayer takes his time perfecting his craft in the studio unlike other artists. After knowing the album was to be released in April, followed by the announcement of the official release date April 29, 2016, then another announcement of the album release shows. It was clear the decision to attend one or more of these shows was a must. Not to mention the amazing acoustic versions that have been available for weeks now.

The night began with a great set by Solid Stone that easily set the tone of what was to be a great night. You see at these events, it is about the music and enjoying it with other like minded individuals. As mentioned by the man himself on the podcast Trending Topics with BB, creating and feeding off the energy by the #SchulzArmy and #TranceFamily becomes a spiritual like experience.

The set was FIRE from the very first note of "Watch the World" till his drop of his New World Punx track "Memories".  The #RabbitHole "surprise" was the cherry on top of a completely sundae of a night.  How can you not enjoy the music released by the Coldharbour Recordings Family right now? This label is just en fuego on so many levels! Huge shout out to the Coldharbour, Schulz Music Group, Exchange LA, and Markus for an incredible night!

It is already known, that music brings people together, but when you agree on the music, it almost becomes an out of body experience. Having been apart of other "fan groups", there really isn't a nicer more passionate group of people than the #SchulzArmy or #TranceFamily.  The common courtesy, inclusion, and overall encouragement to have a great time throughout is certainly the best HIGH available.  Creating lasting memories through mutual love and respect of a man who had declared his devotion to music and the fans over and over, as evident by this past weekend, will continue.

Thank you to all of you who are becoming new found friends, and till the next event, PLEASE BUY not just stream 'Watch the World'.


I really like this shot of #UnicornSlayer during the #RabbitHole! Thank you for an incredible night, and congrats on your new album 'Watch the World '! #SchulzArmy #trancefamily #phoenixtrancefamily
A photo posted by Brooke Brown (@saxy15) on Apr 30, 2016 at 10:17am PDT

Posted by Brooke Brown at 11:52 AM No comments: