The Package Tour: A Review by @heatherk330 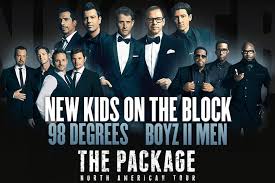 The Package Tour is one that is filled with the music of the 1990’s, Boyz II Men,

98 Degrees and of course, New Kids on the Block (also known as NKOTB).   For the

Rosemont concert on 7/18, one of three concerts I’ll be attending on the tour, the

audience got three hours of fun and bit of nostalgia.  For me the day began with a 5 Star

is that you get into a group of ten, many fans try to form groups prior to the show to

ensure they can stand by their favorite, and get to meet the guys in that group.   Now

every fan has their favorite, many refer to it as being a “insert their name here” girl

(personally I’m a Donnie girl), but each one of the guys usually holds a special place in

the hearts of their fans (myself included).


One thing I will certainly say, is that these five men do not disappoint up close

and in person.  Even in a few short moments of meeting the group and taking pictures

they make you feel as if you are the only person in the room during that brief moment.

They are happy to see their fans, and when they say they love their fans and appreciate

everything that we do for them, you can feel it.  Some will say that they can be rendered

speechless upon meeting them, which I can certainly relate.  Meeting the group you've

loved and enjoyed since you were a child in person can certainly do that.


After the VIP experience, I got to the hardest part of the night: waiting.  With

plenty of other fans around (NKOTB, 98 Degrees and Boyz II Men) you always have

someone to talk to.  I met some fans who had traveled from Europe just to see the

tour, others that had been to multiple shows just because they couldn’t get enough.

even though we may live on opposite sides of the country or around the world.  There’s

always something to talk about, whether it’s the possibility of a cruise for 2014 (yes,

there is an NKOTB cruise), which song is their favorite on 10 or what surprises might be

in store for us.

The concert in and of itself is an experience.  NKOTB’s set begins with the pledge

(as recited by Donnie Wahlberg) that we all repeat, “I do hereby pledge to spend the

next two hours having the time of my life.  I leave all the drama, all my worries, and all

my fears behind me.  I promise to celebrate tonight like there is no tomorrow.  For this

is my night! I worked hard for this night, I deserve this night!  I earned this night and

together we own tonight!” This leads immediately into “We Own Tonight,” the opening

track from their newest album 10.


There are of course their most popular songs, like “Hangin’ Tough” and “The

Right Stuff” and ones from The Block like “Summertime” and “Single.”  Mixed in with

moments where each member gets to showcase their talent.  “Survive You” is a perfect

example as each member gets their own moment during the song, which elicits cheers

and applause from everyone.  Goosebumps and shivers are prevalent during Joe

McIntyre’s performance of “Please Don’t Go Girl,” showing just how much “the Kid”

(as Donnie playfully calls him) has grown up into a performer.  Jordan Knight gets to

showcase his incredible vocal range in “Kiss” and “Tender Love.”  One moment where

you may hear the loudest screaming is during “Cover Girl,” when Donnie happens to

tear off his shirt.  Danny Wood break dances, which is always a fan favorite, and Jon

Knight just has a blast on stage, but also gets his moment with crowd renditions of


During all of the songs, the energy is electric, and fans are on their feet from

beginning to end.  There is really no sitting down at a NKOTB concert and no bad seats in

the arena. In what seems like the blink of an eye, you begin to hear Dropkick Murphy’s

“I’m Shipping Up to Boston” and know that sadly, the end of the night is here.  The band

dons their Boston jerseys (sometimes the Red Soxs, in this case the Boston Bruins) and

begins the closing number “Hangin’ Tough.”  For some, after the concert comes the

In some cities, some lucky fans are able to go purchase tickets to the After Party

that takes place at the venue.  The party is usually hosted by Donnie Wahlberg and Boyz

II Men, with special appearances from other members of NKOTB.  (The Rosemont one

also included Danny, Jordan, and Jon.)  This part of the night begins with a quick photo

op before the partying begins.  The guys tend to circulate around the room, taking

pictures and mingling with fans, but a party hosted by Donnie is definitely one that you

should go to if the chance arises.  The best thing about the After Party is not only getting

to meet other fans but also seeing the band have fun off the stage.  Jon takes a turn

being the DJ, Donnie makes sure the party does not stop, and the energy from during

the concert continues on into the After Party.


If you've never been to a New Kids on the Block concert, it’s an event you will

not forget.  While they may have been around for 25 years, it’s as if the feeling from the

first time you heard one of their songs on the radio, or saw them in person comes back

ten-fold.  Thankfully, fans get to relive a piece of this through the new release of “The

Whisper” music video which was filmed during several concerts.