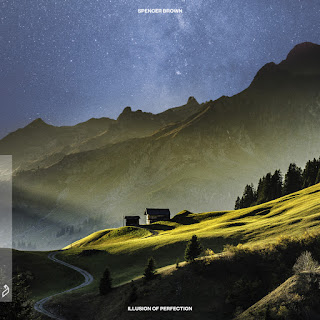 For the past couple of years, a DJ/Producer by the name of Spencer Brown has been making some serious waves among the roster of Anjunabeats. The support from Above & Beyond through tracks on Group Therapy or including them on their 'Common Ground' tour stops has certainly shown a delightful relationship. Spencer Brown already has a reputation for creating great original tracks, remixes, and mashups for journey mixed sets. From experience, despite Mr. Brown's claims, this blog hopes for a "Thriller" by Michael Jackson rework that he debuted on a recent tour to be released.

'Illusion of Perfection' not only is a the perfect title for this album, but it foreshadows some themes you will experience along the way. The production of this mix-album is top notch, and if you don't listen in its entirety, you may not grasp its brilliance. From start to finish, every track builds on the previous one, which leads you on a great journey. This album proves the talent that Spencer Brown has, and this blog looks forward to more and more great progressive trance in the future!  Please support this album in any form you can!