Album Review: 'Word of Mouth" by The Wanted

Yes, suddenly need to share my thoughts on the LONG awaited album by The Wanted. Why? You ask. Well, to be honest, this blog is about THE MUSIC, I want to give my honest opinion. (As if I am really qualified music critic. Yet some people enjoy my opinions)

Let's just re-live LONG.  Yes, it has taken two years for this album to finally be released. Why is this significant? Well, The Wanted was formed in 2009, and the popularity has grown significantly worldwide.  They began with school tours all over the U.K., Europe, and other places, then the tours have become bigger and better.  You are asking why you should pick up a album by a "boyband" when there is so much out there? Well, The Wanted aren't your average boyband. They realized they aren't about choreographed dance moves is not their style. The Wanted focus on the music and their vocals.

Well, each member can play instruments as well as sign. Nathan has a well ranged voice with his pianist ability. Max's voice is delightful, along with his ability to play the bass guitar. Tom has a great upper ranged voice with great electric guitar skills. Siva has a lower, but beautiful voice along with guitar skills. Last, but certainly not least Jay has a great upper range voice with percussion skills. With their musicianship, comes great personalities and need for the music ti be good quality. Despite pressure from their record label, and management, the took the time to spearhead the making of their album.

With the time passing over the years, The Wanted released singles from albums not worldwide released.  With the worldwide success of "Glad You Came" , "All Time Low", "Walks Like Rihanna", and the new singles "We Own the Night" & "Show Me Love" the accolades were sure to come. 2013 has also brought a People's Choice Award  to their list of victorious events. The TWFanmily (name of their fans) has grown all over the world, so the anticipation of a worldwide released album and tour has grown.

The album titled "Word of Mouth" has met expectations. It begins with "We Own the Night", which carries the party anthem feel good song they have released before. "In the Middle" is an upbeat yet poignant song with great lyrics.  The inclusion of hit singles "I Found You", "Walks Like Rihanna", & "Glad You Came" is great.  However, those aren't the best songs on the album.  "Summer Alive" is a great party song about that feeling during the Summer. "Glow in the Dark" is another party anthem sure to get clubs banging granted DJs add this song to their mixes. "Everybody Knows", "Love Sewn" are lyrically mature songs that obviously was coming from personal experiences the lads have had over the years. "Running Out of Reasons", "Could this Be Love", & "If We're Alright" add the the lyrically and musically poignant writing The Wanted and their producers worked together over two years. "Demons" is a great song about the angst the male psyche can experience. "Drunk On Love" changes the tone of the album with a fun useful party song.

Ending the deluxe version of the album is "Heartbreak Story".  Yes, the song title alone stirs you in THAT direction. Granted the song was written by Max and Jay, Jay to start off the song by singing flawlessly just worked. The rest of the band lends their best vocals as well, and the break in the song with the great piano sound, you immediately remember and know Nathan is the reason.  The lyrics and the music were intertwined like a vine around a pole.  Anybody who listens to this song will relate and probably end up in tears by the end of the song.  Live performances on the upcoming world tour will become a moment everybody attending remembers.  Just listen to this song!

Whether or not you are fan of The Wanted, give this album a listen from the first song to the last.  You may be surprised by the quality and understand why it took two years to make.

Congratulations Max, Nathan, Tom, Sivan, and Jay on your new and best album YET!! 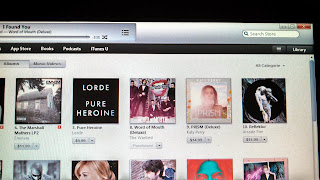