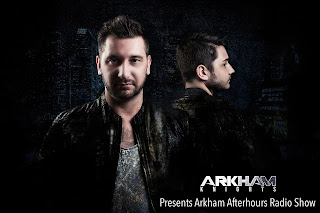 At first this was going to be a review about one or a couple of tracks from the duo Arkham Knights, but due to how much they are blowing up the trance music scene right now, an artist review is clearly the better choice.

If you are unfamiliar with Arkham Knights, it is okay, they have only been around for a year upon joining the Coldharbour Recordings family.  Before the breakdown of the tracks currently on rotation on Markus Schulz' Global DJ Broadcast as well as many trance fans playlists, it important to point out how fitting their sound of trance with a techno darker vibe is with the signature sound from the label.

Let's begin with the track "Knightfall".  From the minute you press play the intro builds, then builds more, followed by the beat and the first melody to catch your ear. The intricate beats from there add another layer to the track, and you know it is going to continue to build.  The marriage of the beats with the melody will grab a hold of you, and you are in for that trance track that you can't help but love.

"Urban Decay" is not just your average upbeat trance track that the intro presents. Once the melodies kick in, it is clear that this track is meant to be listened to in its entirety. The interlude followed by the drop of a harsher melody layered on top will lend to your enjoyment of the track.

"Blackgate" immediately begins with a driving beat to get your body moving. Then the MELODIES kick in, and you will find yourself with your hands in the air, perhaps with your eyes closed in that state of trance. The layers of beats build once again, but you know the melodies are going to return with such vigor, then they drop! Take a listen for yourself, if you haven't already done so.

Last, but certainly not least, "Legacy". The pattern of intros with such a beat and tempo to grab your attention continues. The layering of melodies kick in to get you moving once again. THEN the track really begins to build, with an intriguing melody to keep the vibe high. The melodies retain strength throughout the track along with the back beats. This recently released track on Coldharbour delights many during a set by Markus Schulz as well as those who tune into the Global DJ Broadcast weekly.

Along with other artists signed to Coldharbour, Arkham Knights is on FIRE right now, and they are just getting started. Can you imagine the tracks not yet released or thought of yet? Whether you are a long time fan of trance or new to the scene, listen then buy a couple or all of their released tracks for your auditory pleasure.

P.S. Be on the lookout for the interview/chat with Arkham Knights on the Trending Topics with BB Podcast!