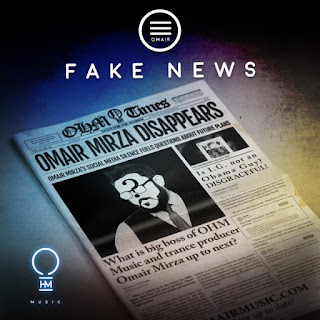 In a world where music can be an escape from all of the negativity going on, why not gain inspiration from present times? OMAIR A.K.A. Omair Mirza (featured on this blog many times) has taken upon himself to create a trance track that draws from the current United States political climate.

"Fake News" not only is titled from the catchphrase of the current U.S. President, but the track takes you on a journey of discovery. From the very first beat, to the melodic layers, to the final beat drops, this track should make you reflect on the times. "Fake News" has some progressive trance influence, but will be revered as a pure trance track. Along with the mystery OMAIR has created, make sure you support this track when it is officially released on OHM Music May 11th! Also, make sure to check out OMAIR's set at the quantumVALLEY stage at EDC Las Vegas 2018!
Posted by Brooke Brown at 3:17 PM