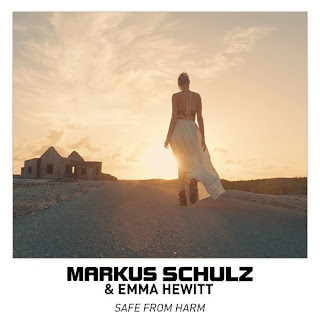 The past couple of years have seen Markus Schulz release both 'Watch the World' & 'The Nine Skies' as well as a 'Watch the World' Deluxe version. However, as most in the trance scene are aware, producers never stop producing new tracks. Some of these tracks get official releases or become additions to to their DJ sets around the world. Emma Hewitt has had her beautiful voice featured on many collaborations in the trance scene for years. Ms. Hewitt's collaborations with Cosmic Gate, Ferry Corsten, Gareth Emery, and many more have been very well received by trance fans throughout the world.

With recent focus on with many sub-genres of trance, we can not forget or overlook the beauty of vocal trance. After all, music is subjective, and evokes different emotions for different people. A collaboration from Emma and Markus has been a long time coming. "Safe from Harm" begins with a solid beat sequence, followed by layered melodies, then Emma's vocals seal the deal. The track is everything you should want in a vocal trance track.  Do not just take our words for it, stream it here now!